The most recent of rumors to emerge from the whirlpool is the availability of LaMarcus Aldridge. The San Antonio Spurs are looking to trade the veteran power forward for a top-10 draft pick, at minimum.

Top trade partner ? The Sacramento Kings, who hold the fifth and tenth overall picks in this year’s draft.

He didn’t respond well. Though he posted points and kept the offense moving, there were a lot of missed opportunities. He scored only eight points in the elimination game, and was 4-11 from the field.

#Spurs said to be dangling LaMarcus Aldridge in hopes of landing top-10 draft pick. "Watch out for the #Kings," one exec tells AmicoHoops.

His post-season play was inconsistent and not that of a Spurs star player.

For this, he’s found himself on the trading block.

The Sacramento Kings have been an enigma of sorts in the NBA, taking on rogue free agents looking to boost their market value (Rajon Rondo, Rudy Gay). Most recently, they shocked the NBA world by trading top five big man DeMarcus Cousins during the All Star game. It’s not everyday a team trades the face of the franchise.

That being said, the spot is open and up for grabs. Yes, they are committed to shooting guard Buddy Hield. A young shooting talent, who’s shown heavy potential, but still needs time. Trading for Aldridge right now, makes the Kings somewhat relevant, and it will only cost them one draft pick (in theory).

Yes, the Kings can draft future talent with the fifth and tenth overall picks. However, a trade for LaMarcus NOW may prove more beneficial.

Adding LaMarcus on roster guarantees you fifteen points a night, and some mediocre defense in the post (more than they have now). He’s not the same Aldridge that lead Portland to post-season after post-season, but he’s a valuable piece at 31 years old. 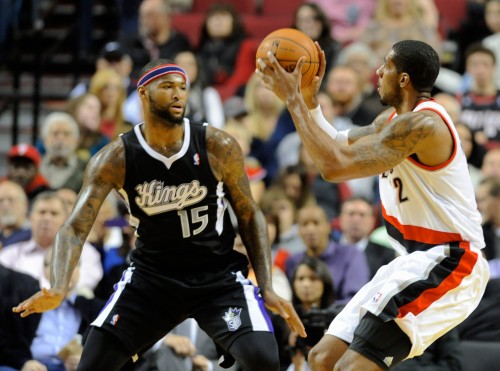 The Kings have cap space like no other. After trading away Cousins, fans were enraged, not realizing the value behind his departure. He was on the books for another $31-million through 2018.

Now, their highest paid player is Aaron Afflalo at $12.5 million. Not enough attention is being paid to their capability to offer a max. Next season, they are only on the books for $49-million (excluding draft selections).

Say the Kings trade for Aldridge, and keep one lottery pick. That means their core will be three top ten talents from the draft (Buddy Hield, Willie Cauley Stein, + Draft Pick), and a former NBA All Star. See where I’m going?

That core, and salary aplenty, will make them an optimal location for free agents looking to sign that big contract. Having Aldridge on roster will dictate to what stature those free agents are.

I won’t get too carried away, they have plenty of free agents of their own to sign, but that comes later. Nonetheless, you get the point.

Despite wanting to draft that top ten talent, LaMarcus is on a $20+ million dollar contract with a player option for 2018-2019. Shedding that salary puts them in position to sign top free agent prospect Chris Paul.

They’ve also been linked to rumors of looking to trade Danny Green’s $10-million dollar salary. They’re making room for somebody, and it’s no doubt why they’re looking to move Aldridge.

Due to their desire to shed said salary, it’s hard to predict a trade between these two parties. It will likely involve an expiring contract and one of the two picks held in Sacramento.

For the Kings, I can see an outcome where they end up with LaMarcus Aldridge. Keeping a big name player on roster keeps fans invested, and gives some life and veteran insight to a young rebuilding club.

For the Spurs, it’ll likely take more than the fifth/tenth overall pick. Aldridge was supposed to fill Tim Duncan’s role in a dynasty system. It will be interesting to see the details unfold.

All stats and information provided by ESPN, Basketball Reference, and NBA.com. Featured image provided by AsiaSportz via Google Images.