Arguably one of the best Batman’s we’ve ever seen, Batman Beyond originally aired in January of 1999. Through only three seasons, the show delivered a total of 52 episodes, below I ranked my top five:

In a two episode pilot, it’s a new development to the dark knight’s story. We see an older Bruce Wayne shut away from the rest of Gotham. He has vowed to never don the batsuit again, until trouble comes knocking.  A young delinquent by the name of Terry McGinnis, loses his father and through an ironic set of situation becomes the new Batman. Earning the approval of Bruce, the two decide that through a team effort they can protect Gotham once again.

I chose the Pilot because face it, the first episode of shows like these usually rank somewhere in the top 5. Seeing the emergence of a new Batman, the old Batman, and a futuristic Gotham cements this one into the top five for me.

Batman Beyond took a break from it’s serious troubles in Gotham for a goofy and lighter feeling episode. A recurring theme in TV shows, Terry is instructed with taking care of an egg baby for his Home Economics class. He faces troubles, having to deal with the egg baby as Terry and a gang of thieves as Batman.

It’s not just your ordinary episode of Batman, and it finds a way to be comical. Terry deals with the troubles of being a single father (his partner was no help), and successfully makes too many dad jokes with Bruce. The nature of The Eggbaby and the fact that an episode of Batman made me laugh, earns it the number four spot on this list.

Out of the Past stands alone from all the rest due to it’s look into the past of Bruce Wayne. For all those Batman the Animated Series lovers, we see the return of Thalia Grace, or so we think. Arriving in time for Bruce’s birthday, she insists on gifting him with a bathe in the Lazarus Pit, or more simply a fountain of youth. 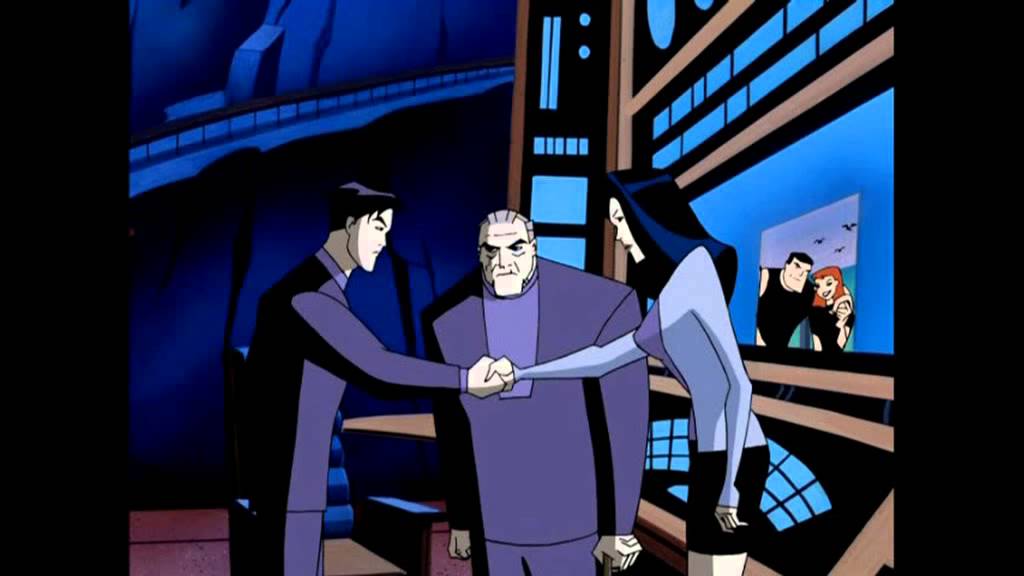 Bruce reluctantly agrees, and we see him in his prime, more importantly, fighting alongside Batman (as opposed to being Batman.) The return of old faces, and the continuation of the original dark knight’s story make Out of the Past an easy choice for number three.

Another two part episode, The Call is a personal favorite. An elderly Superman appears to Bruce Wayne, and relates his desire for Terry to join the Justice League (which is not as big a club as I remember.) Once hired on, Superman tells Terry he suspects one of the league’s members is a traitor attempting to kill them all, so Batman is tasked with isolating the traitor. These two episodes are very cool, and will play a later role. We get to see the future of the Justice League, the ongoing relationship between Bruce and Superman, and the role that Batman will always play with the Justice League; outcast. I chose The Call for number two for it’s importance to the plot, and incorporation of other heroes.

Now this isn’t actually an episode of the series, Batman Beyond. It is the season one finale of Justice League Unlimited. However it plays heavily into the plot of Terry McGinnis role as Batman, and is the final episode we never got. We get to see the future of Terry McGinnis, who is actually working with the Justice League. Now decades into the future he realizes a very dark secret, he is the son of Bruce Wayne.

Seeking answers, he confronts Amanda Waller, a political figure in the DC Universe, and the woman responsible for Wayne’s fatherhood. Here, we learn how Terry became Batman, and that regardless of any DNA coding, it was fate. Concluding the story of Batman, this Justice League Unlimited episode earns the top spot.